Kristian Nain, the actor who plays Hodor in the hit series Game of Thrones, stopped by an AT&T flagship store in Boston to meet fans and talk about his experience on the show. 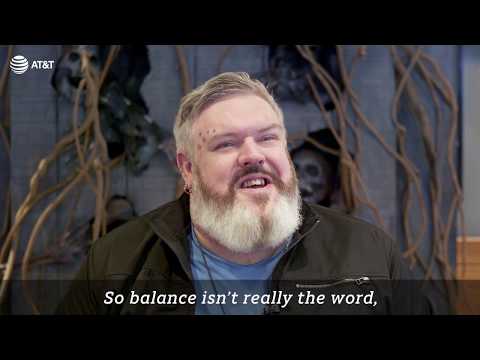 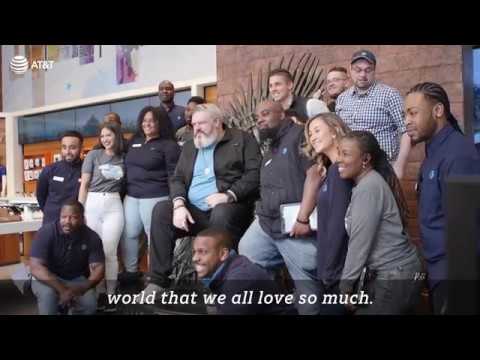 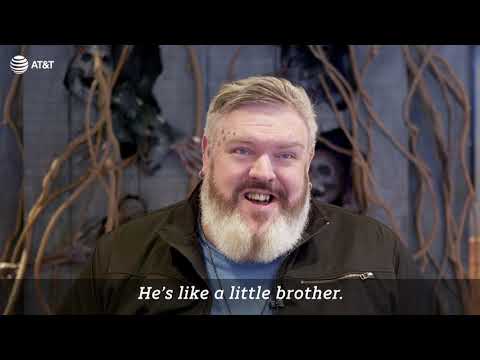 Fans Get More #ForTheThrone -- Exclusive Accessories, Unique AR Experience from Magic Leap, and even the Iron Throne Itself

AT&T* and HBO have launched a joint marketing campaign celebrating the highly-anticipated final season of Game of Thrones, premiering Sunday, April 14 on HBO.

The 360-degree marketing campaign stretches across AT&T’s footprint through retail activations, exclusive accessories, video on-demand, Magic Leap, AT&T THANKS and event sponsorship integrations – all to give customers and fans a plethora of ways to enjoy, engage and interact with HBO’s most successful drama.

“This is the biggest television event in recent history, in large part due to the show’s passionate, loyal and committed fan base,” said Valerie Vargas, SVP of advertising and creative services, AT&T.  “In celebration of that fandom, and as fans ourselves, we have created unique experiences across all of our platforms that only AT&T and HBO can offer. With this campaign we aim to celebrate the show’s superfans and its permanent place in pop culture.”

“There’s no better way to celebrate the finale of this epic HBO show than to give its devoted, passionate fans opportunities to immerse themselves in the Game of Thrones world leading into the final season,” said Zach Enterlin, Executive Vice President, program marketing, HBO. “Together with AT&T, we are committed to giving superfans a fun, memorable way to experience Westeros and the characters they love so much.”

As the countdown to April 14 begins, here’s how AT&T gives you more #ForTheThrone:

AT&T and Game of Thrones

AT&T is bringing Game of Thrones to life. From flagship store activations and an exclusive new Magic Leap Experience, to the ultimate online fan hub and exclusive accessories, AT&T has everything you need to get ready for the last season of the hit series.

Exclusive Game of Thrones Magic Leap Experience only at AT&T

Using the Magic Leap One, fans will be able to interact with Game of Thrones like never before at the AT&T flagship stores in Boston (Boylston) on April 1, Chicago (Michigan Avenue) on April 3 and San Francisco (1 Powell) on April 6.

In each of the three stores visitors will encounter, Game of Thrones presents “The Dead Must Die,” a Magic Leap Encounter that challenges the bravest of fans to confront a White Walker and lead the fight for the living. Curious visitors will be fitted with a Magic Leap One and step into a physical representation of King’s Landing, which instantly transforms into an ominous, icy scene that begs investigation. With torch in hand, visitors become soldiers in a standoff, as a frozen portal reveals the deadly world beyond the wall. It’s scary to see a White Walker, but it’s much scarier when it sees you.

Find out more on pricing and availability of Magic Leap here.

Catch Up, Interact and Learn More with Tons of Content from DIRECTV

Learn about the characters and look into each battle, betrayal, sacrifice and death with the Game Of Thrones® Challenge1, a free (no HBO subscription required) set-top-box application presented by DIRECTV & HBO.  The interactive app can be found on DIRECTV channel 512, and will test you and your friends knowledge with in-depth trivia questions to unlock videos.

Need to catch up? Subscribe to HBO to start from the beginning - all seven seasons are available* on DIRECTV On Demand, DIRECTV NOW, the DIRECTV app, HBO GO®, and HBO On Demand®.

AT&T will give the uninitiated a chance to catch-up at no extra charge leading up to the premiere with a preview of HBO on DIRECTV and U-verse. Customers can watch the premiere episode at no charge and then add HBO to continue watching.

Starting April 1, customers will have a chance to Own the Throne, 2 where one lucky person will win an iconic Iron Throne like the one used in the acclaimed series.  For more sweepstakes and Games of Thrones content, download the AT&T THANKS app.

An Online Hub Built for the Ultimate Fan

With never-before-seen videos rolling out now through the week the premiere, the Game of Thrones entertainment hub is the ultimate destination. Complete with episode recaps, quizzes, in-depth character profiles, downloadable wallpapers and behind-the-scenes content, this online destination is built by superfans, for superfans.

Get Exclusive Accessories in Stores and at ATT.com

Throne too big to fit in the doorway? Don’t worry, ATT.com and AT&T retail stores around the country are carrying dozens of exclusive Game of Thrones accessories you can bring just about anywhere from phone cases, power cables and wireless chargers to wine tumblers, water bottles, pint glasses and more.

Before April 14th there is the other fan-obsessed, binge-worthy, who-will-survive TV obsession – NCAA Final Four. Fans in the stadium in Minneapolis can be on the lookout for an augmented reality experience on the big screen that turns fans into virtual White Walkers. At the AT&T Fan Zone inside the Minneapolis Convention Center, fans can test their hoops skills in a game of G-O-T, or they can stop by the Throne Room or Fire & Ice Room for sharable photo opps with authentic show props and costumes.

About Game of Thrones:

We help family, friends and neighbors connect in meaningful ways every day. From the first phone call 140+ years ago to mobile video streaming, we innovate to improve lives. We have the best network according to America’s biggest test.** We’re building FirstNet just for first responders and creating next-generation mobile 5G. With DIRECTV and DIRECTV NOW, we deliver entertainment people love to talk about. Our smart, highly secure solutions serve over 3 million global businesses – nearly all of the Fortune 1000. And worldwide, our spirit of service drives employees to give back to their communities.

HBO® and related channels and service marks are the property of Home Box Office, Inc.

Starting on August 8th, AT&T customers can pre-order the new Samsung Galaxy Note10 and Note10+ for use on the nation’s best and fastest network.

Starting tomorrow, AT&T customers can get the latest in AI Technology by ordering the new LG G8 ThinQ.

Magic Leap One to Launch Next Week, Only from AT&T

The Magic Leap One wearable computer will offer an immersive experience like never before.